Safe and successful field camp in 2020!

Despite complications and many safety protocols to accommodate the ongoing pandemic, the department's field camp was able to go ahead as planned in the summer of 2020.

The course began as a 2-week virtual course, during which students were strongly encouraged to quarantine (and given lots of work to make this happen). During this time, students were led in virtual instruction by Marli Miller and Jim Watkins. Marli instructed the students on classic Rocky Mountain structure of the Dillon, Montana area, while Jim led the students on the volcanology of Oregon. Following this period, the students came to Eugene where they were tested for COVID-19 (at the UO Health Center if they hadn't been before arriving) before leaving for the field. This was followed by another test at camp a week later, all of which resulted in negative results.  Jim led the students on a field trip to Newberry Volcano, after which the students and camp director Ray Weldon settled into camp next to the South Fork of the Crooked River. The camp was located behind a locked gate on private land, and the students then mapped in the adjacent South Fork and Hawk Rim Wilderness Areas for 3 weeks, and the course was concluded by Samantha Hopkins, who led the students on a 3-day virtual paleontology session focused on the fossils found by the students. 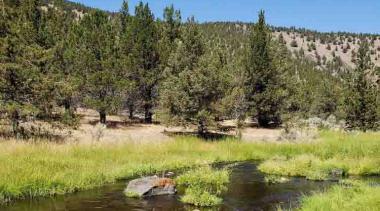 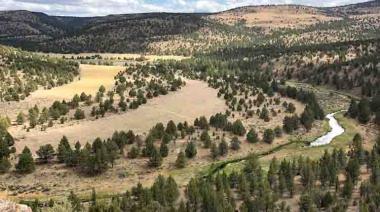 Beyond the usual first aid training, field safety instruction, and other measures, this camp had to navigate COVID.  To manage this new hazard, the camp was structured into nested sets of groupings so that interactions could be easily traced in the case of a positive COVID test or symptoms. Thankfully, no symptoms or positive tests appeared during the course of the field camp.  Three-person mapping groups were formed as a safety precaution so that in the case of injury, one person could remain with the injured while one person could leave to seek help. These mapping groups even had designated porta-potties for each group!  The groups of three were also placed into sub-camps and cooking groups. These precautions ensured that in case of a positive test result, the entire camp would not be immediately jeopardized.

The field section of the course involved recon mapping (1:12,000) and measuring of stratigraphic sections of an area that had never been mapped in detail and contains diverse rocks, including the classic John Day sequence, Columbia River Flood Basalts, Tertiary ash-flow tuffs, and Quaternary fluvial deposits and surfaces, all moderately deformed, including several active faults that offset the Quaternary Units. Students mapped on USGS Geopdfs and LiDAR products including slope maps and REMs (relative elevation models – excellent for mapping fault scarps and correlating fluvial deposits), measured, described, and correlated stratigraphic sections and flights of terraces up and down the river using GPS and Jacob’s staffs, and located and documented the abundant fossils (which were later analyzed in the virtual paleo section and inducted into the Condon museum collections on campus).

We are pleased that our field camp went off without a hitch, and look forward to another safe (and successful) camp in Summer 2021!