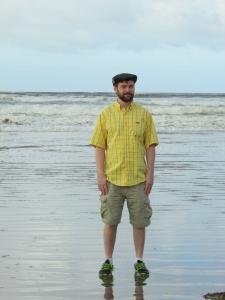 Julian McAdams is a research scientist and machinist at the University of Oregon. He was born in Atlanta, GA and lived there until June of 2018 when he and his wife, Mary, moved to Eugene, Oregon. He graduated from Georgia Tech (GT) with a bachelor’s degree in Earth and Atmospheric sciences (EAS) in 2010 and again with a Masters in EAS with concentration in Geophysics in 2017. He began work at GT as a lab manager in the fall on 2012. While employed at GT he built lab equipment and apparatus, assisted in experiments, fulfilled administrative duties, as well as a medley of other responsibilities within the EAS department. In the summer on 2018 Julian moved to Eugene to continue comparable duties at the University of Oregon. He currently works in Volcanology as a research scientist as well as in the TSA (Technical Science Administration) as a machinist. He enjoys cycling, hiking, and the great outdoors as well as a good beer or scotch.