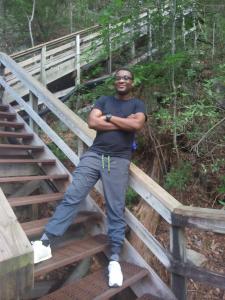 Fatai Balogun is originally from Nigeria, where he graduated with a
B.S. in Geology from Obafemi Awolowo University in 2012. Also, he
graduated with a M.S. in Geosciences in 2017 from Georgia State
University. His B.S. project focused on the measurement of radiation
exposure due to naturally occurring radionuclides in Gemstone mining.
His M.S. Thesis investigated the effect of time and temperature on
Ultisol and Mollisol.  At the University of Oregon, he will work with
Matthew Polizzotto’s group to understand the chemical and
mineralogical controls on release of heavy metals from sediments into
ground water. He is also interested in processes that enhances the
cycling of redox sensitive metals within the Earth’s Critical Zone. In
the future, he would like to work at a multidisciplinary research
institute where he could collaborate with scientists from different
fields to proffer sustainable solutions to arrays of environmental
problems of the 21st century.  When Fatai is not spending countless
man hours in the school, he’s an avid fan of soccer and motor racing.
He also enjoys watching documentaries about ancient civilization.

Thesis Title: Investigating the effect of aging and time on the fate and transport of Lead in artificially contaminated tropical soils.