Welcome to our newest cohort of graduate students!  Read on to get to know them a bit better.

Kaisa Autumn: I am from Portland, Oregon and started my undergraduate studies at CU Boulder studying astrophysics. While there, I did astronomy research on variable stars. After two years I transferred to the U of O and graduated with a major in physics and a minor in Earth science. The past two years I have worked as an undergraduate in Prof. Emilie Hooft’s lab doing seismic tomography to image the magmatic system below Santorini. In the fall I will be pursuing my PhD under Professor Emilie Hooft and am very excited! I will be working on a project related to the Cascadia subduction zone. In my spare time I enjoy being outdoors with friends. 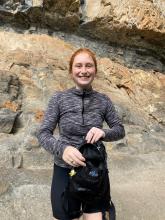 After growing up in St. Paul, Minnesota, Victoria Benson attended Pacific Lutheran University for a B.S. of Geosciences. She conducted glacial research on Mount Rainier studying the sediment and ionic concentration of meltwater from multiple glaciers on the impressive mountain. In addition to research, this is where she cultivated her joy and knowledge of backpacking aka “roughing it”. She recently hiked the Arizona Trail and Pacific Northwest Trail! Victoria is joining the Earth Science department to focus on Alaskan glaciers by working with Professor David Sutherland in his Oceans & Ice Lab. After working seasonal jobs around the country she is excited to be back in the Pacific Northwest! In her free time, Victoria likes to hike, run, attend concerts, care for her plants, and play card games. 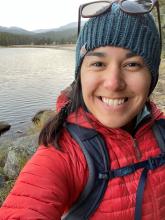 Lyzzy Coultley grew up in Los Angeles, California. They pursued their undergraduate degree in Physical Anthropology at the University of California, Stanislaus, which is in the middle of nowhere, Central California. Lyzzy then volunteered as a docent, preparator, and excavator at La Brea Tar Pits for four years, where they fell in love with paleontology. From there, they got the Master's in Biology, focusing on the biomechanics of flightless ducks. With their admission to the University of Oregon secured, Lyzzy plans to work in the Vertebrate Fossil Lab, with a focus on Antilocapridae (pronghorn antelope) ecology and evolution under the guidance of Dr. Edward Davis. Their interest in paleontology is form / function relationships, paleoecology, and geometric morphometrics, along with comparative and integrative biology. In their free time, you can find Lyzzy crocheting or doing multitude of other granny hobbies, like needlepoint and sewing. If not crafting, you'll find Lyzzy most likely at coffee shop downing espresso and lattes, while reading. 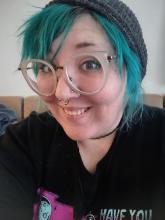 Amelia Cuomo: I'm originally from Brewster, New York, but have been living in North Carolina the last 5 years. I went to UNC (go heels!) and got my B.S. in Geology, a B.A. in Physics, and a Music minor. I fell in love with Oregon in the Summer of 2020, when I flew out here for the first time to come to field camp in the middle of the COVID pandemic. I met Marli Miller then, and am excited to be working with her! 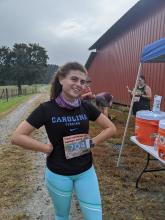 Selina Davila Olivera: I am from a small farm town in the central valley of California and received my bachelors in science from UC Santa Cruz in Earth Sciences. It was there where I became interested in Geomorphology while doing research and a thesis in failure mechanisms for slow-moving landslides. I followed an initial career path in California water issues and worked as a Jr Research Specialist at UC Merced for a few years and then transitioned to a Hydrologic Technician at the US Geological Survey. I will be working with Dr. Josh Roering. In my free time, I love to play soccer, hike, climb, or have a nice evening on the couch watching shows and movies.

MaKayla Etheredge grew up near Washington D.C and received her bachelor’s degree in Geology from the University of Maryland, College Park. During the last year of her undergraduate career she completed a thesis project that focused on analysis of bubble textures in order to estimate magma decompression rates of Cerro Machin Volcano in Colombia. She has been interested in geological hazards since she was in grade school! She is very excited to continue her volcanology research with Joe Dufek and Kathy Cashman at UO! In her free time, she loves photography, thrifting, and exploring new landscapes. 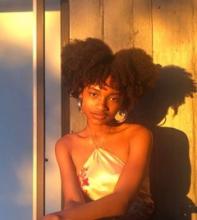 Deanna Flores is from a small town in the foothills of North Carolina. She attended North Carolina State University and earned her bachelor's of science in zoology. During this time, Deanna found her passion for research after joining a functional morphology and anatomy lab. She then went on to complete a master's in biology at Sam Houston State University. Her background is rooted in biology rather than geosciences. However, her research interests in paleontology bring both subjects together. Deanna's research has compared hyoid bones in both extant & extinct canids and looked into the faunal make-up of a previously understudied site on the Texas coast. She is thrilled to be joining Dr. Hopkins' group to continue her journey into paleontology. When Deanna is not playing with fossils, she can be found spending time with her dog, Athena, contently working on a 1-2000 piece jigsaw puzzle, or in the kitchen trying new recipes.

August Harrell is from Atlanta, Georgia where he recently received his Bachelor's degree from Georgia Tech in Earth and Atmospheric Sciences and where the surrounding forest nurtured his interest in nature. While exploring the topics found under the earth and atmosphere umbrella, he discovered an interest in geochemistry including mineral formation, element cycling, and microbially mediated reactions in mineral-water interface systems. This interest is fueled by a desire to understand how these systems are affected by natural and anthropogenic inputs and how they, in turn, affect their surrounding ecosystems, including human communities. Pursuing this interest, he worked with Dr. Yuanzhi Tang, shadowing Ph.D. student Estefania Garcia in her research on Arsenic and Selenium speciation in coal fly ash and developing an affection for the lab environment. In addition to academic study of nature, August has a passion for outdoor recreation including hiking, camping, rock climbing, and gardening. This passion pulls him towards exploring field work as well as lab work during his graduate studies. He is excited to pursue these topics as part of Dr. Matt Polizzotto’s group this Fall! 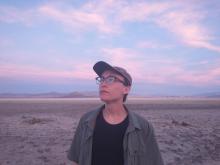 Spencer Hurt grew up in the small town of Fruita, Colorado, surrounded by mountains and red rock desert. After spending a year along the East Coast for school, he transferred to CU Boulder and earned his degree in astrophysics. During this time, his research revolved around the detection and characterization of exoplanets (planets outside of the Solar System). Wanting to study the processes that shape planetary surfaces and atmospheres in greater depth, he decided to spend graduate school focused on Earth and planetary science. While at the University of Oregon, Spencer will work with Dr. Josef Dufek, investigating the physics of volcanic eruptions. As someone who loves hiking and the outdoors, he is excited to explore Oregon and the Pacific Northwest!

Zoe Lefebvre was born among the volcanic rocks of Hawaii, but grew up in the carbonates of Missouri.  She attended Washington University in St. Louis, where she completed a senior thesis in the lateral and facies-dependent variation of stable sulfur isotope geochemical proxies in carbonate rocks.  After graduating, she took a temporary position in the Failure Analysis Lab at Apple performing X-ray CT on consumer electronics.  That temporary position lasted five years, and after spending a year in Cork, Ireland to open a lab there, Zoe quit her job to work on a farm and apply to graduate school.  She is super excited to join Paul Wallace’s group and to explore the new-to-her field of volcanology and the geochemistry of volcanic rocks.  In her free time, she likes to read, run, cook, and take her dog Ruby to the dog park. 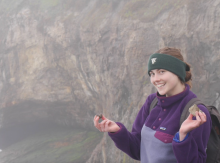 Margery Price was born and raised in Lincoln City, on the Oregon Coast, where she grew up surfing, backpacking, and playing lots of soccer in the rain. Although she is an incoming master's student, she is not new to Eugene– Margery graduated from the UO Earth Sciences department with her B.S. in Geology in 2022! Also in 2022, she defended her senior thesis project advised by Dr. Thomas Giachetti investigating graywater filtration capabilities of pumice and scoria; for the next two years, she'll work further in the Giachetti group to continue researching how these fascinating volcanic rocks can be used to improve wastewater systems worldwide! Alongside her studies, Margery loves teaching people about science (especially geoscience!) and has worked as a conservation intern, educational program presenter, interpretive walk leader, day camp instructor, and curriculum developer for various science education groups. Around Eugene, you can find her hammocking in the park, swimming in the Willamette, or drinking a LaCroix in the Cascade courtyard! 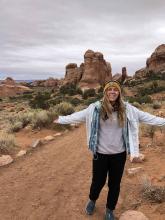 Alex Simpson grew up in Las Vegas, NV and received his Bachelor's degree in Geophysics from the University of Nevada, Reno. Initially interested in seismology, his interests shifted to geomorphology and hydrology as he went further along in his undergraduate career, and especially after a summer internship with CTEMPs. He is excited to not only expand his knowledge of groundwater systems in the classroom, but also by studying springs and lakes in the Cascades with Leif Karlstrom. When he isn't doing that, he's probably at home chillin' out, playing video games, doing puzzles, and homebrewing. Occasionally, you might see him riding a bike or stand up paddleboarding. 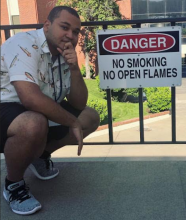 Kseniya Vialichka grew up in Gozha Belarus where she spent most of her time on her grandmother's farm. She later moved to Massachusetts where she attended The University of Massachusetts Lowell for a B.S. in Geoscience. Under the guidance of Dr. Kate Swanger Kseniya worked with sediments from alluvial fans in Antarctica’s Dry Valleys. This project is where her love of volcanic ashes and processes stemmed from. At The University of Oregon, she will be studying under Dr. Ilya Bindeman. When she is not working you can find her reading, swimming, or looking quizzically at a phase diagram. 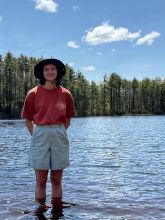 Ian Wachino (he/him) was born and raised in Allendale, New Jersey, where he enjoyed hiking in the nearby Appalachian Mountains. He attended Franklin and Marshall college in Lancaster, PA where he fell in love with earth science. During his time there, he studied the effects of freeze-thaw cycles on stream banks of “legacy sediment”- sediment deposited behind colonial-era dams. After graduating, Ian began work as a geologist & navigator on research vessels supporting offshore wind projects along the east coast. Upon joining Dr. Josh Roering’s lab, Ian is excited to begin work on landslide warning systems in Southeast Alaska. 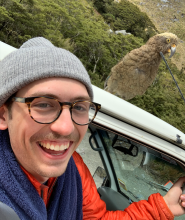 Keel Wilde has lived most of their life in northern Georgia and western North Carolina, but spent the last four years on the front range of Colorado where they completed their BA in Geological Sciences at the University of Colorado, Boulder. Prior to transferring to the university from community college, they completed a summer REU internship with a CU geomorphology lab where they used machine learning to map an active debris flow site. They continued working with the same lab once at CU and wrote their honors thesis on mapping erosion in the Utah badlands using historic aerial imagery. Several years of their undergrad were also spent at the National Center for Atmospheric Research as a machine learning intern (mostly processing big data and evaluating machine learning pipelines). They would eventually like to be on the volcanic hazards side of research and are stoked to be joining Leif Karlstrom’s group where they will be working with data from Kīlauea volcano in Hawai’i, USA. Outside of earth science, Keel has spent a lot of time using natural methods to tan deer and sheep hides, and is now learning the art of wheel-spinning wool. Other favorite non-science activities include biking with their partner, Sea, or hiking with their little long-dog, Spike 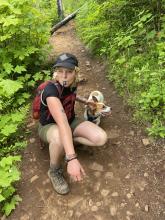