The department hosts a number of visual displays within our buildings that highlight various mineral collections and geological themes. These displays are open to the public during business hours for viewing and admiration.

Gordon G. Goles Meteorite Collection: 1st floor Cascade Hall. This collection was originally assembled by Professor Gordon G. Goles, an expert in cosmochemistry and the origin of our solar system, who was on the UO faculty from 1967 until his death in 2003. Its original purpose was for research but in later years Dr. Goles had begun to transform the collection to a display collection through judicious trades with other researchers and dealers. The collection today contains 83 individual specimens, about two-thirds of which are polished slabs, many of which are quite spectacular. Meteorites of most types are represented, including pallasites, chondrites, eucrites, diogenites and octahedrites.
The efforts of Martin Horesji (Idaho State University) and Alex Ruzicka and Melinda Huston (Cascadia Meteorite Laboratory, Portland State University) in helping to identify and classify many of the specimens are gratefully acknowledged. 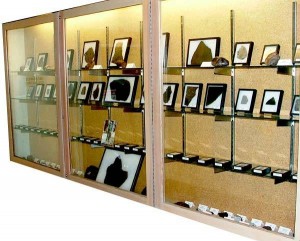 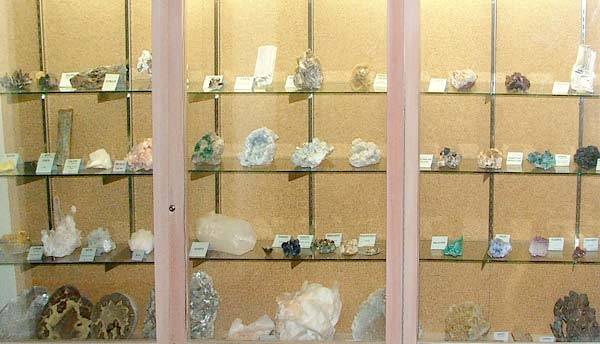 Mineral Collections: 1st and 2nd floors, Cascade Hall, and 1st floor Columbia Hall. The Department has on public display extensive collections of museum-quality mineral specimens. The vast majority of these were donated by collectors or their heirs, and most mineral groups are represented. One case is located in the main entry to Cascade Hall, three others are in the main hallway on the first floor of Cascade Hall, adjacent to the Goles Meteorite Collection, and a fourth on the second floor of Cascade Hall, across from the main conference room. Another two cases of display-quality material are in the hallway of the first floor of Columbia Hall.

Volcanology Display: This display, on the first floor of Cascade Hall features several particularly nice specimens of volcanic rocks, including pumice, pahoehoe, obsidian, welded tuff, mingled magma, and vesicular basalt, against a photographic backdrop showing the interior of North Sister Volcano which has been revealed by glacial erosion. 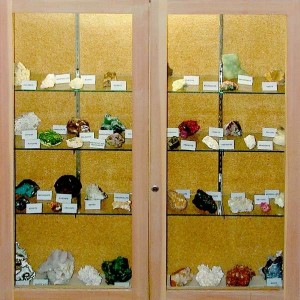 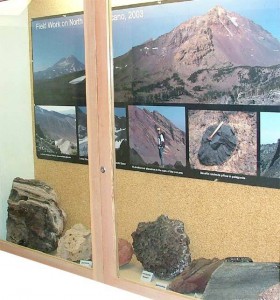 Surveying, Then and Now Display: This display, in the hallway of the 3rd floor of Cascade Hall, features many of the tools of “old-fashioned” surveying, including a hard hat, compasses, a theodolyte, a plumb bob, and an altimeter, set against a backdrop of a modern digital elevation model derived from satellite measurements.

Cascade Courtyard: The courtyard surrounding the fountain in the courtyard of Cascade Hall is itself a geology display. It was originally intended to consist of just dark grey basalt stepping stones set among red bricks but as construction proceeded, many faculty members in the Department donated specimens from their personal and research collections to add greater diversity. Happily, the contractor agreed to incorporate them and set them in concrete as construction proceeded. In all, 67 such specimens are included including a particularly rich variety of coarse-grained metamorphic rocks, some fossil-bearing sedimentary rocks, and a wide variety of volcanic rocks. A map identifying these specimens is available at the front desk in the Department Office, 100 Cascade Hall. 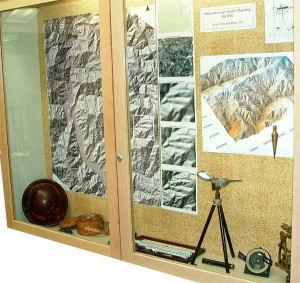