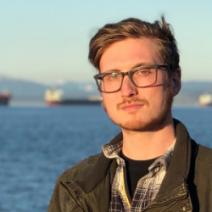 After graduation, Trevor interned for Rapid Soil Solutions as a geotechnical field work assistant. Soon after, he landed a job as assistant project scientist at Martin S Burck Associates, drafting field maps and performing data entry in support of environmental remediation projects. Trevor is now a staff scientist at Intertek-PSI, in Portland, where he conducts Phase I and Phase II environmental site assessments and hazardous material surveys throughout the Pacific Northwest. 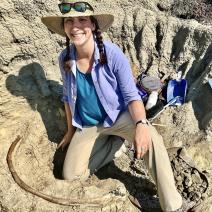 Amy's time at UO was fantastic and she felt very well prepared after graduation. Amy took a year off between undergrad and graduate school to be the Paleontology/GIS Intern at Denali National Park and Preserve in Alaska for 6 months, which was an opportunity offered through GeoCorps. Amy then applied for the NSF GRFP during her gap year and was fortunate to become a Fellow for her graduate school experience at UT Austin. Amy's Master's thesis was described and named three new genera and three new species of omomyids, an Eocene primate, as well as completing phylogenetic analyses for the family. Amy also completed a paleontology internship at Big Bend National Park during the summer of 2016. After completing her Master's in 2017, she landed her current job at the Museum of the Rockies. Memorable moments from UO include any and every class with Marli Miller. Amy also benefitted from her involvement with the Geology Club, and Dave Blackwell, who really made geology come alive. Field Camp at UO was truly a life-changing experience. Amy felt like a true geologist after completing it and made friends and connections that will last a lifetime. 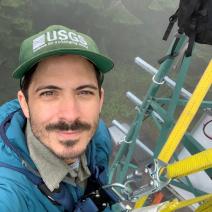 After graduating from UO, Brian began an internship with the Cascades Volcano Observatory collecting geodetic data to monitor deformation of Cascade Volcanoes and soon after was taken on as a volunteer at the Hawaiian Volcano Observatory. Afterward, Brian worked in the private sector analyzing soils for a geoengineering firm but his passion for volcanoes and working in the field led him back to CVO where he was fortunate enough to be hired on full time in 2018 as a Physical Science Technician. The bulk of Brian's work involves installing and maintaining monitoring stations that use seismic and geodetic data to keep a finger on the pulse of the Cascade Volcanoes. Brian worked as part of the 2018 Kilauea eruption response, and regularly gets to fly in helicopters doing work in remote and beautiful places, and nothing ever feels routine. In short, Brian feels like he has one the coolest jobs in the world that wouldn't have been possible without a degree in Earth Sciences and the encouragement he received from the Department of Earth Sciences faculty. 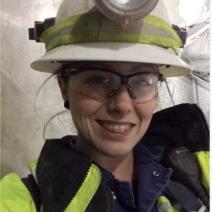 During her summers at UO, Brittany worked as a wetland mitigation assistant for the city of Eugene where she worked on a restoration project at the Quamish Prairie mitigation site. Four months after graduation, she landed a job at the Newmont Goldcorp Corporation, where she began as a geotechnical engineer specializing in rock mechanics and ground control. Brittany later became a project geologist for Newmont Goldcorp Corporation at a 120+ year-old surface cold mine in Colorado. She then took on the role of interim senior ore control geologist, putting her on a managerial track to oversee a team of ore control geologists for production mining. Brittany is now the State Lands Geologist for the Olympic Peninsula in the Washington State Department of Natural Resources. Brittany attributes Marli Miller's structural geology class at UO to many of the skills she uses in her job today.